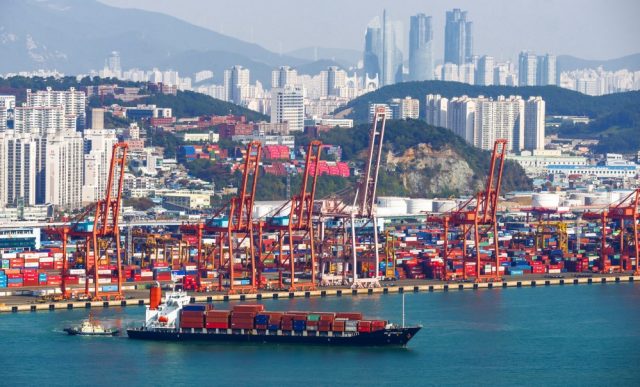 South Korea’s exports have surpassed the annual US$600 billion mark for the first time ever, the government said Friday, according to Yonhap News Agency.

The Ministry of Trade, Industry and Energy said the total value of outbound shipments reached the record high as of 11:12 a.m.

It is the first time that the country’s outbound shipment total has breached the number since the country began selling goods on the international market 70 years ago.

Only six other countries in the world, including the United States, Germany, Japan and China, have achieved the feat so far.

Asia’s fourth-largest economy saw its exports grow an average 16.1 percent annually from 1948 onward, with numbers for the first year standing at just $19 million.

The ministry said it took 23 years to reach the landmark figure of $600 billion following exports surpassing the $100 billion level. The pace of growth is the fourth fastest among the seven largest export countries. China is No. 1 in the field by pulling off the monumental increase in 11 years.

“Next year, global trade is expected to face strong headwinds, such as a possible slowdown of major economies and protracted trade disputes between the U.S. and China,” the ministry said. “But the South Korean government will do its part to attain the $600 billion performance again in 2019.”© Content from this site must be hyperlinked when used.