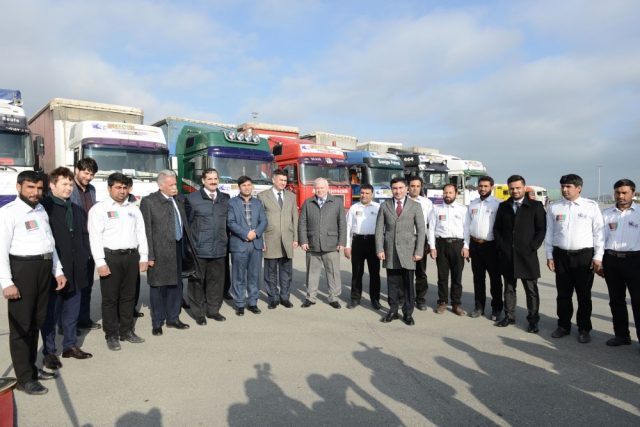 Speaking at the ceremony dedicated to the arrival of the first cargo to Azerbaijan via this route, Ambassador of Afghanistan to Azerbaijan Khairullah Spelenai expressed gratitude to the government of Azerbaijan for comprehensive support and assistance in the implementation of the project.

He noted that the Lapis Lazuli corridor will be expanded and Afghanistan will make every effort to make this route the most important one from Afghanistan to Europe.

In turn, Turkish Ambassador to Azerbaijan Erkan Ozoral noted the importance of the route for Afghanistan and other countries. He said that this route will turn into an important corridor that will provide access of Afghan goods to world markets. The ambassador noted that Lapis Lazuli is of strategic importance for Turkey and Azerbaijan.

Nine trucks left Afghanistan’s Herat city on December 13 and arrived in Baku along this corridor Dec. 25. The total volume of cargo is 175 tons.

The cargoes are transported via trains and vehicles through Afghanistan’s Torghundi city in Herat province and supplied to Turkmenistan’s Ashgabat city and from there to the Turkmenbashi International Sea Port, as part of the Lapis Lazuli international route.

The corridor stretches to Azerbaijan’s Baku city, then through Georgia’s Tbilisi city to Turkey’s Ankara city with branches to Georgian Poti and Batumi, then from Ankara to Istanbul.

The project budget, which aims at facilitating transit logistics and simplification of customs procedures, is estimated at $2 billion.