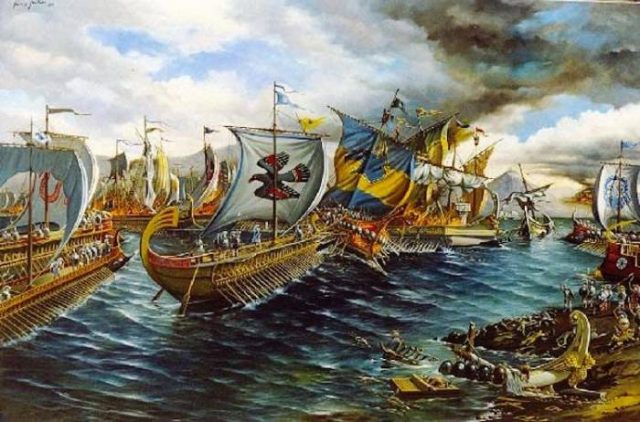 There have been countless navies in the last three thousand years of human history. Built by seagoing nations or those wishing to expand into the realm of naval powers, multiple navies often compete to provide security and expand national influence.

The Greek Navy at the time of Second Persian invasion was not the largest in the known world. Instead, it beat that navy and through its victory preserved western civilization.

A land power, the Persian Empire created a navy out of conquered seafaring nations. This multinational force included Phoenicians, Egyptians, Cypriots, and sailors from various parts of Greece and Asia Minor. The Persian fleet numbered 1,207 triremes — the standard oared warship of the time — but lost roughly 250 before Salamis to storms and skirmishing at Artemisium.

The Greeks, led by Athens and Sparta, assembled a force of 381 triremes. Although outnumbered at least two to one, the Greek Navy at Salamis inflicted such losses that the Persian Navy was forced to withdraw.

The Greek naval victory at Salamis had two major outcomes. The Greek Navy protected the sea flank of the Greek armies, preventing Xerxes from outflanking them with an amphibious landing. Second, Persian losses were significant enough that Xerxes ordered a withdrawal of the navy, and the invasion was brought to a halt.

The ruling Ming Dynasty had an outward-looking agenda, looking to secure trade routes for the import of luxuries and raw materials to a growing China. Chinese naval technology was probably the most advanced in the world, with shipbuilding technology — such as three and four-masted sailing ships — sometimes a thousand years ahead of Europe.

The fleet of the first expedition was massive, consisting of 317 vessels. Sixty of them were so-called “treasure ships” over 400 feet long, 160 feet wide, with nine masts and twelve sails. All in all, Ming China mounted seven expeditions. The scope of the fleet’s travels, including Southeast Asia, India, the Horn of Africa and the Persian Gulf, were breathtaking.

Internal strife would eventually lead to the end of the Ming Dynasty and its expeditions, and China would never again possess such a powerful fleet.

The end of the Napoleonic Wars in Europe left the Royal Navy the largest, most powerful navy in the world. As the navy of an island nation, the Royal Navy was essential in securing the sea lanes to the UK’s overseas colonies, particularly those in North America, India, and Africa.

This period corresponds with the so-called “Pax Britannica,” a period of relative peace in the world. The average size of the Royal Navy during the 19th Century was only 52,000, and yet it played an outsized role in keeping a lid on “big war” conflict.

The Royal Navy maintained its relative strength through the so-called “two power standard,” which required it to be at least as strong as the next two largest navies combined. Such overwhelming superiority deterred other powers from challenging London, and upsetting the balance of power in general.

Other than the Crimean War, which saw the quick destruction of the Russian Navy’s Black Sea Fleet, the Royal Navy fought few surface actions. Instead a series of minor ones within and at the periphery of the British Empire, against pirates in North Africa and the South China Sea, African slavers, and opening up foreign markets including Japan and China.

The Imperial Japanese Navy (IJN) at the outset of World War II in the Pacific was the most powerful navy in the world. Japan, like the United Kingdom, was an island nation that was forced to import oil and other raw materials from abroad. This vulnerability impressed on Japan the importance of building a large navy to maintain its sea lanes… and secure those resources for itself if necessary.

The start of the war saw Japan with ten aircraft carriers , with 1,500 of the best carrier pilots in the world. It had twelve battleships, including the powerful Nagato class, and many modern cruisers, destroyers and submarines. It had the best carrier-based fighter in the world, the Zero-sen, and excellent torpedo bombers, dive bombers and even land-based aviation.

The IJN was superbly armed and trained, as victories at Malaya, Pearl Harbor and the Solomon Islands all attested to, but a series of poor decisions by the naval leadership — compounded by an inability to replace battle losses in a timely fashion — sealed its fate. However brief its reign at the top was, the Imperial Japanese Navy of 1941 could easily be considered one of the most powerful navies of all time.

The United States Navy of 1945 emerged victorious from a two-ocean war, fighting two very different campaigns in each. In the Pacific, Japanese gains from the Philippines to the Solomons had to be reversed, while in the Atlantic the Navy was responsible for mitigating the U-boat threat and conducting invasions of North Africa, Italy, and France.

A further 71 escort or “jeep” carriers and 2,547 amphibious ships further supported the war at sea. The U.S. Navy even had a land component, six Marine divisions and five Marine air wings that fought from Guadalcanal to Okinawa.

The resulting naval might meant the U.S. Navy never lost a battle after 1942. An ever-dwindling Imperial Japanese Navy was inexorably pushed farther and farther eastward, until the Japanese surrender in August 1945. At that time, the U.S. Navy was easily the most powerful navy in the world.

Kyle Mizokami is a writer based in San Francisco who has appeared in The Diplomat, Foreign Policy, War is Boring and The Daily Beast. In 2009 he co-founded the defence and security blog Japan Security Watch. 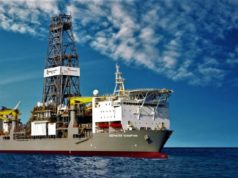 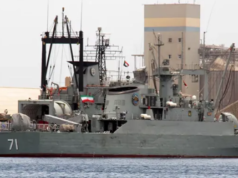 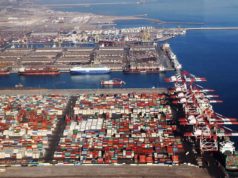