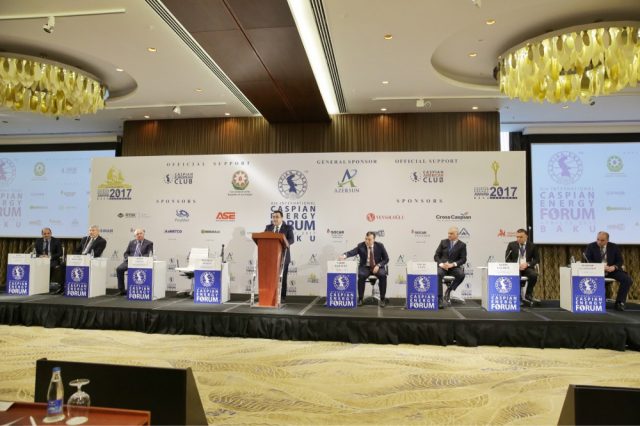 The 4th International “Caspian Energy Forum Baku 2017” kicked off in the capital of Azerbaijan under support of the Government of the Republic of Azerbaijan and the Caspian European Club (Caspian Business Club), AzerTAC reports.

Telman Aliyev, the First Deputy Chairman and Chief Executive Officer of the Caspian European Club (Caspian Business Club), speaking about the purposes of the forum noted that the main goal is to support strengthening of business-state contacts. “The previous three forums were also hosted in Baku. Similar forums will be held in 50 world countries as well”, he stressed.

After the video-addresses by Maroš Šefčovič, Vice-President of the European Commission for Energy Union and Kolinda Grabar-Kitarović, President of the Republic of Croatia, to the participants, the Forum was continued in sessions.

The event is attended by heads of government institutions, ministries, committees and agencies of Azerbaijan and across the countries of the Caspian-Black Sea and Baltic regions, representatives of diplomatic missions and missions of international organizations accredited in the Republic of Azerbaijan as well as executives of large international companies.